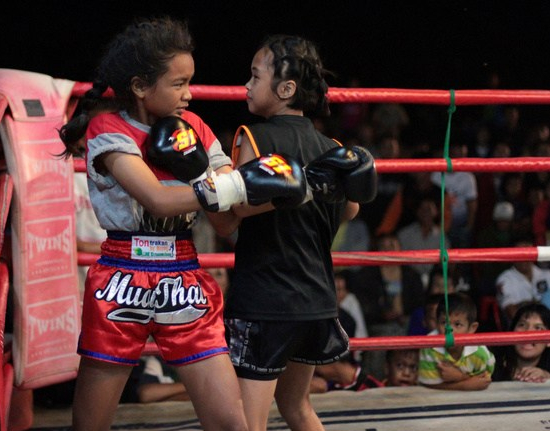 I saw teenage girls fighting Muay Thai recently in Bangkok, and I’m still not sure how I should feel about it.

The fight featured girls as young as 14 battling for glory in front of a healthy crowd of tourists at the end of the Muay Thai Live: The Legend Lives spectacular at Asiatique: The Riverfront in Bangkok.

The promise of authentic Muay Thai fights had lured many visitors who lacked the desire or means to attend a local Muay Thai event full of predominantly testosterone and alcohol charged men betting their life savings on their chosen warrior.

My comfort was jolted when I saw the two girls emerge for the female fight. They were tiny. Both were short, slim, fit, athletes who looked more like junior marathon runners than fighters.

Surely they’re too young, too small, too slim. They’ll snap in half.

While the girls performed the customary pre-fight ritual, I wondered how much they must weigh, and where they would be placed in boxing categories; featherweight, bantamweight, flyweight…?

Then my questions were answered. Look  ‘Supergirl’ Jaroonsak weighed in at just 48kg. The 15-yr-old would be classified as Mini Flyweight, and her opponent was actually shorter and younger than her.

The next shock arrived with the sound of the opening bell. The girls charged at each other, bouncing, kicking, clinching, kneeing and punching with the energy and freedom of a schoolyard brawl, which any school teacher would feel compelled to break up. The fights continued under the watchful eye of the referee and the young fighters’ natural athleticism, impressive flexibility and sharp skill created two very entertaining contests.

The pint-sized warriors didn’t hold back. The punches were real, the kicks were real and often well placed. The pain was real and so was the blood.

The fight didn’t last the distance, unfortunately. While ‘Supergirl’ lived up to her nickname, the fight came to a premature end when her opponent had to retire hurt. She was stopped not by the barrage of kicks to the leg or torso, not by the punches to the face or the elbows to her crown. Nor did she succumb to Jaroonsak’s  lethal knee strikes. No, she was stopped by a sprained ankle; the same injury she could easily sustain running cross-country or playing tennis or netball.

This incident reminded me that this fight was simply competitive sport for the girls, the officials, the coaches and even the families of the girls, who clapped their daughter upon victory or consoled her in defeat.

It was certainly a sport to Supergirl’s infant brother, who lapped the ring imitating his sister’s kicks and punches with great enthusiasm.

So, while one young girl limped out of the ring with an ice pack around her ankle, I began to think.

Why am I uncomfortable with girl’s fighting?

Would I feel the same way if the fighters had been 14-15-yr-old boys? Am I simply being sexist and conservative?

The girls appear to be fighting by choice and the hours of training had certainly kept them healthy. They demonstrated a high skill level and a genuine respect for the sport and its history, which had been outlined in the preceding stage show.

Is the sport as brutal as it looks?

Is my reaction the product of the safe, sanitised Western society in which I was brought up?

Would my opinion change if I stepped into the ring with them? They’d probably snap me in half.

Are the girls fighting for fun or for a future career?

According to a Thai friend with whom I spoke a few days after the fight, top Muay Thai fighters can earn very good money in Thailand, a country with limited economic opportunities.

Regardless of my doubts, one thing is certain. I don’t remember the names, ages or weight of any of the male fighters from that night, but I certainly remember ‘Supergirl’.