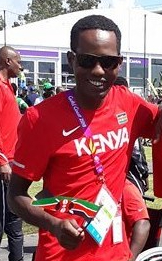 Suleiman Kangangi was pleased but not elated with his 19th place finish in the recent Commonwealth Games Road Race on the Gold Coast, Australia.

The Kenyan cyclist crossed the line 57 seconds behind race winner Steele Von Hoff of Australia and was satisfied with the effort he applied against riders from some of the best professional teams in the world.

Kangangi was prominent in the bright red Kenyan jersey as he joined the first significant break-away with 115km remaining in the race. The strong group included African arch-rival, Rwandan Joseph Areruya, and Australian Matt Hayman, a former winner of Paris-Roubaix.

Sky team rider Luke Rowe, of Wales, brought Kangangi’s group back into the peloton, where the Kenyan rested before following more attacks up the two climbs in the middle of the course.

After Peter Waruiru and David Kinjah fell too far off the pace and were removed from the race, the Kenyan team consisted of Kangangi and Salim Kipkemboi

“Salim went with the next move while I kept my cool in the peloton, trying to save energy. It wasn’t easy with such a small team.”

The boy from Eldoret, in the Rift Valley, started the final lap in the peloton, alongside Kipkemboi and another Bike Aid teammate, Charles Kagimu, who rode for Uganda and finished in 20th place, with the same time as Kangangi.

The trio fought to stay in touch with the leaders as the favourites from the British Isles, Australia and New Zealand launched attack after attack.

“I knew something would happen before the finish, but at this point Salim was already spent and I just couldn’t put myself closer to the front, due to the wind and the fast pace,” he explained.

“On the first climb, New Zealand went full gas and I was caught a little bit behind. On the second climb I managed to get back to the front group which was like a selection of 10 guys, but before I could catch my breath (Individual Time Trial winner Cameron) Meyer attacked and I couldn’t follow immediately.”

“Hayman and I got dropped and we tried to ride to the finish, but another group from behind caught us.”

Kangangi, Kipkemboi and Kagimu now head to Kenya before resuming their racing season in Europe.