Kenyan cyclist Salim Kipkemboi was “a bit tired” after finishing 39th in the Commonwealth Games Road Race on the Gold Coast, behind gold medallist Steele Von Hoff of Australia, who won in 3:57.01.

Kipkemboi battled hard all day and featured in the second major break-away of the day, before Von Hoff’s teammates, especially Individual Time Trial gold medallist Cameron Meyer, brought the group back into the peloton, where Kipkemboi joined compatriot Suleiman Kangangi.

Both Kenyans were in the peloton when the bell sounded for the final lap, before Kiwi powerhouse Jack Bauer launched the first serious attack and decimated the peloton. A small, elite group fought out the final bunch sprint, 2:38 minutes ahead of Kipkemboi.

“The result is not so good, but I did my best,” he said after the race.

Kangangi also featured in a major break, and Kipkemboi explained that this was a deliberate strategy.

“We had to be in moves. There were only two Kenyans left for most of the race because our other teammates ( David Kinjah and Peter Waruiru ) got dropped on a very fast lap.”

Kipkemboi’s presence in the break-away group, which dangled in front of the peloton for about 50km, drew praise from the Australian commentators, who saw it as a sign of the progress of cycling in Kenya and Africa.

The rise to international competition, against cyclists who race for the world’s very best teams, is also a sign of Kipkemboi’s personal progression. It is not so long ago that he was selling firewood on the side of the road near his home in the northern Rift Valley. Now he is a full-time, professional cyclist.

“Cycling is now a major part of my life, since I signed a contract with a continental team. I now see a bright future and a better life,” he explained.

“My parents couldn’t afford to pay for my secondary education, but now I have managed to buy myself a piece of land and I’m looking forward to building a house, God willing.”

“I didn’t know cycling was going to take me this far, but now I realise it is a privilege and it is important as a way of earning a living. I’ve been able to help my parents and my brothers and sisters and it’s been a great adventure to see different parts of the world.”

One part of the world he is now more familiar with is Germany, the home base of his new professional team, Bike Aid, with whom he signed after strong results for his first team, Kenyan Riders.

It was in Bike Aid colours that he achieved his best result so far, a stage win in the Sharjah Tour earlier this year. 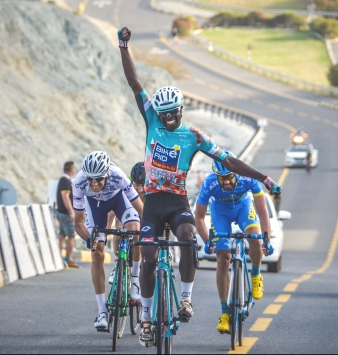 The toughness required for elite cycling is something Kipkemboi developed as a child in rural Kenya.

“The most interesting thing I can remember about my childhood was how I used to enjoy playing with my neighbours. After school we would walk and play bare foot and at the time it was painful whenever I stepped in thorns, but that was just normal.

Now I know that it was making me hard for my future,” he laughed.

A future, he hopes, that includes participation in the biggest cycling races in the world.