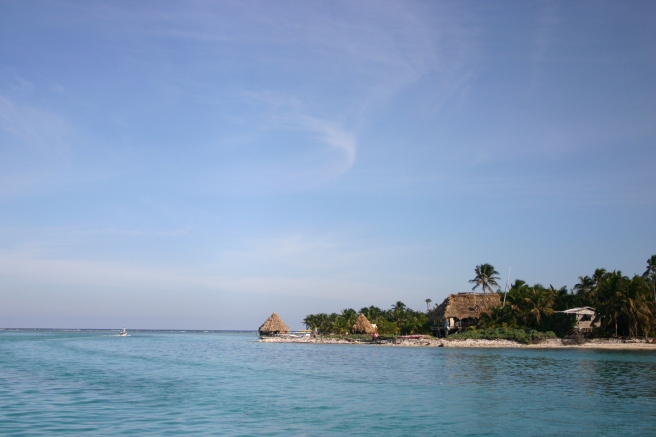 Life is tough for some people.

Gazing at the early morning sunlight dancing upon shimmering, shallow, turquoise water, licked by a cool breeze which caresses the skin still basking in the glory of an early morning swim.

Savouring the delectable selection of indulgently fresh fruit and pastries while deciding upon a latte or a cappuccino, or a caramel latte – oh, it’s all too tough.

Pondering the possibilities of another day in paradise which promises to be as idyllic as the day before, and the day before that, at Glover’s Atoll, a tiny patch of land surrounded by the Barrier Reef off the coast of Belize.

Seated upon the deck of a thatched roof cabin perched in the shallow waters which ripple beneath the floor and entice us in for swim after swim after swim. Enjoying the Maldives at a fraction of the price.

To swim, or to snorkel, or dive, or fish, or kayak, or chill – to chill in a way that only Belizeans know. To perch upon the deck of a thatch roofed cabin and gaze at the early morning sunlight dancing… for another hour.

Until decisions must be made.

To dive, perhaps. We dived yesterday. Shallow dives close to the atoll before venturing further out into the impossibly deep, clear water, whose visibility obliges visitors to submerge. To mingle with the strikingly colourful and amazingly plentiful fish and sea life which reside along this sea wall just begging to be explored. Explored on a drift dive – letting the current carry us…relaxing in a way that only Belizeans know. 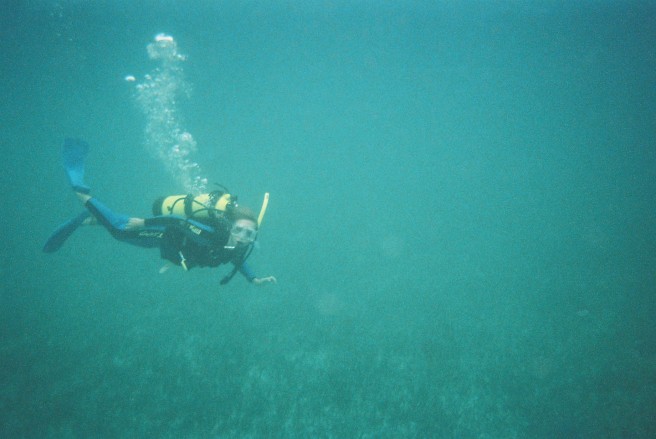 To snorkel. To reach for the snorkel, pop it on and simply flop off the deck of the thatch roofed cabin into the shimmering, shallow, turquoise water teeming with sea life and coral, extending hundreds of metres to the outer reef. We snorkeled yesterday, after diving, and will likely snorkel tomorrow.

To fish. To fish for coral trout, kingfish, snapper, wrasse and myriad other varieties of sea life, all available in abundance at the ‘secret spots’ of our 14 year old guide Warren whose ‘raison d’etre’ is – to fish. To catch fish after fish with the aid of the aforementioned Warren and later have it cooked fresh and free for our enjoyment. We fished yesterday, after diving and snorkeling, and will likely fish tomorrow.

Such were our choices. Or we could sit upon the deck of the thatch roofed cabin and gaze upon the luxury yachts which provide the only break to the horizon which is otherwise indistinguishable as the bright blue sky kisses the clear blue water.

To gaze upon the tiny speck drawing nearer. A smaller yacht perhaps, but darker in colour, but a luxury vessel nonetheless, because nothing else would suffice in this carefully painted tableau.

Perhaps it’s a pirate ship, an idea that sounds as preposterous today as it did when we joked about it during the long catamaran journey from the mainland just days ago. Days ago but worlds away. 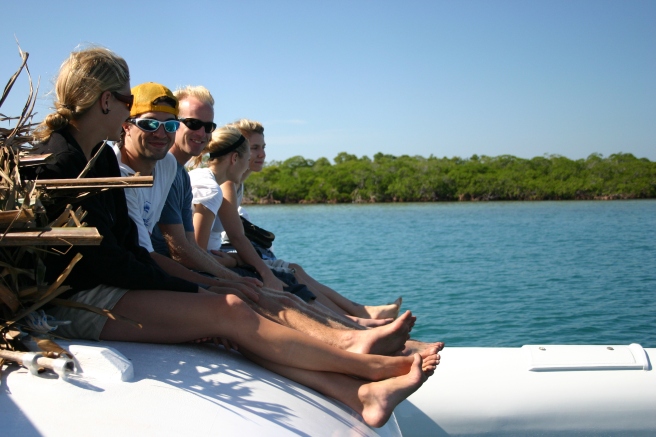 The speck is approaching. The closer it gets, the less it resembles a luxury vessel. A fishing boat perhaps, threatening Warren’s claim to his secret spots.

It nears the shore. It’s not luxurious. It’s belching black smoke and rocking from side to side through the relatively small chop.

It’s not rustic. It’s old, ugly, battered. Barley afloat. Only staying afloat with the aid of old car tyres strapped to its side. And the smoke, a thin column of noxious black smoke, toxic to its passengers.

It nears the shore. We approach. With trepidation. Snapped violently out of our idyllic gaze. This dilapidated excuse for a boat crashes into our postcard of paradise, an incongruous presence.

12 people crammed in. Huddled around a car engine serving as a motor. One man and three tools keep it running and belching smoke.

They’re exhausted. All twelve. And sunburnt and thirsty and hungry. No canopy on the boat.

They’re lost too. As we share some food and water, they recount their tale.

They’re off course. Not supposed to be here, not in paradise.

They’re Cubans, all twelve. Fleeing their homeland, they explain. They’ll sail, or drift, to Honduras, for however long it takes. Then surrender to authorities, get thrown in prison. They know for sure. At least in prison they’ll have food and shelter, something that’s been scarce for the last 15 days.

Life is tough for some people.