I just finished weeding my biggest garden bed, and the good news is I can go back and do it all again in a few days time.

The green shoots that can be seen protruding from the soil in the photo above are the offending (or offensive) articles. I’ve been told it’s nut grass. It’s already starting to send me slightly nutty, simply by the speed at which it grows – if you were really bored, you could watch the grass grow in this garden bed.

The garden is at the back of a rental property on the south coast of New South Wales, about 2 hours south of Sydney, Australia. The soil is generally fertile in a region famous for dairy farming and viticulture, although the garden had been stripped of much of its nutrients when I moved in, courtesy of the previous tenant’s neglect and a dry winter. The garden attracts quite a lot of sun, during very warm summer months and even during colder winter months in what is typically a temperate climate. The area is also famous for beaches and surfing, which is great after a day of hard yakka in the garden.

The weeds are my fault. I didn’t lay down enough newspaper on the first layer of the no dig garden that I established some time ago. 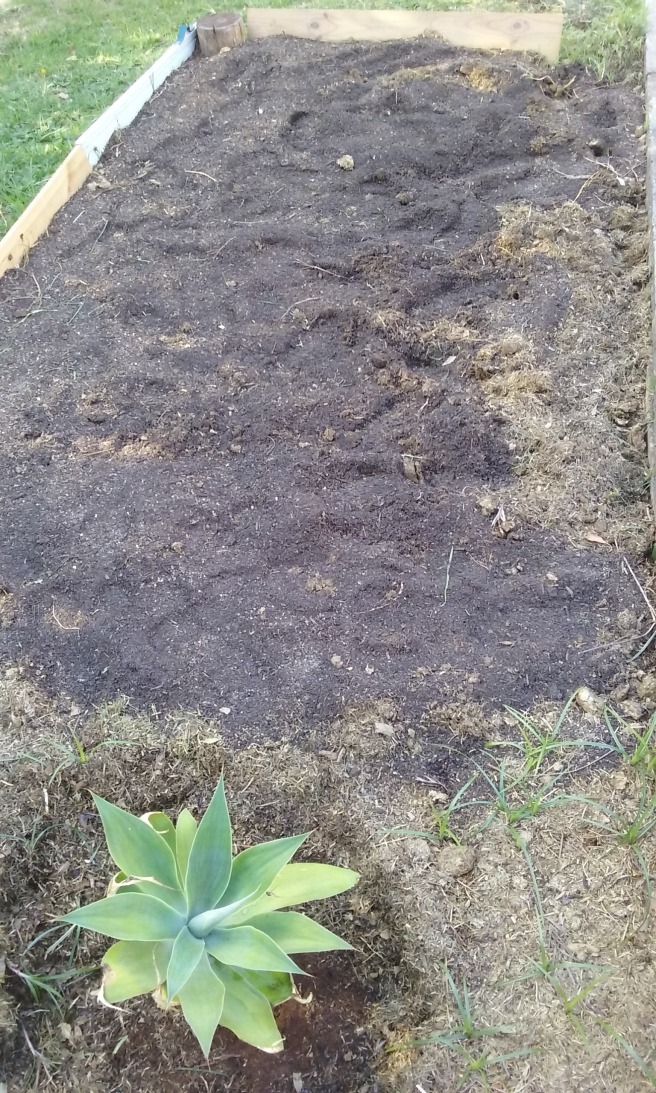 No dig gardening requires a base layer of newspaper which serves to stop weeds from pushing through the subsequent layers of hay (or in my case grass clippings) and manure as well as the top layer of soil.

I’ll remember my mistake every single time I pull weeds out of this garden bed.

I’ll also remember it every time I hang out the washing, cook on my barbecue, check my plants for growth and (hopefully) harvest the food that I am attempting to grow.

Managing the nut grass can be done in two ways, apparently. One, by pulling out the weeds from the root, every time they grow. This is what I normally do, but this is extremely tedious and frustrating and I’ve also noticed that I actually remove some of the fertile soil every time I pull out a weed. At the moment, I’ve been throwing the nut grass in a bucket and putting it in my compost bin, so that the soil is not completely wasted.

I know it’s good quality soil because the potatoes and silverbeet I planted are growing quite well.

The second option for management is to cut the grass at the level of the soil. I haven’t tried this method, but I’ve often wondered what it would be like to be a barber. Should I chat to the grass while I cut it? Talk about the footy, the state of the economy, stupid politicians…or the weather?

I created a second no dig garden bed recently and this time I used a very thick base layer of newspaper. So far I’ve seen no weeds, but it is a fairly new garden bed.

In the meantime, I might go and watch the grass grow.